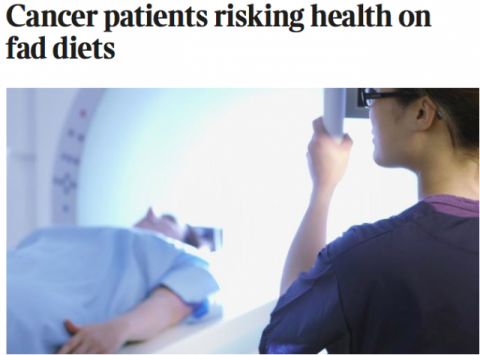 Journalist Jill Nesbitt highlights in today's The Times (Irish edition, May 14th) how experts have warned that cancer patients are putting their treatment at risk by following alternative diets that can result in excessive weight loss.

Cancer patients are putting their treatment at risk by following alternative diets that can result in excessive weight loss, experts have warned.

Arún Fenton, a senior dietician at St James’s Hospital in Dublin, warned that some of her patients had lost between 30kg to 40kg (4½-6½ stone) on so-called “miracle cure” diets.

“They are severely underweight and malnourished when they present back to hospital for mainstream treatment,” she said.

The trend had become more noticeable in the past three to four years, especially among younger patients, Ms Fenton said. She also noticed an increase in the severity of weight loss, which she described as “very worrying”, with some patients requiring earlier IV and tube feeding.

“Sometimes these diets are referred to as complementary but unfortunately many do not complement conventional treatment as they can exacerbate cancer-induced weight loss. This is undesirable as it can lead to poor tolerance and delays of treatment as well as dose reductions,” she said.

Ms Fenton added that some diets could exploit feelings of vulnerability and fear as they held out “false promises”. They could also be extremely restrictive and without any reliable scientific evidence to support their use.

Niamh Gough, a senior dietitian in radiation oncology at the Mater Private Hospital in Limerick, said that because 90 patients a day attended the unit she worked in, she would often only be able to work with the most severely ill.

“In an ideal world everyone with a cancer diagnosis should have access to a dietitian at least once, but that doesn’t happen,” she said.

Ms Gough said that she had to spend time urging patients to eat well and maintain their weight to withstand the rigours of treatment. “Over 80 per cent of patients experience malnutrition from cancer itself, resulting in negative consequences for their treatment and survival. Following alternative diets leads to them putting themselves further at risk. Ultimately we’re trying to get the calories in. We just don’t restrict calories in a cancer setting,” she said.

Ms Gough said that she had known patients to use herbal supplements, wheatgrass and the Gerson diet — an alternate natural treatment plan.

According to the San Diego-based Gerson Institute its therapy activates the body’s “extraordinary ability to heal itself”. It promotes an organic, plant-based diet involving raw juices, coffee enemas and natural supplements to boost the immune system to “heal cancer” and other conditions. Like many diets that promise to assist with cancer it comes with a disclaimer.

On Monday, The Times reported that The Ketogenic Kitchen, a bestselling diet book co-written by Domini Kemp and Patricia Daly, was criticised by oncologists and the Irish Cancer Society.

It involves a high-fat, adequate protein and low-cabohydrate regime and the authors state that it “holds a great deal of promise for patients suffering from cancer and other conditions”.

The Irish Nutrition and Dietetic Institute said that it had “serious concerns about already vulnerable cancer patients buying this book and commencing this diet at home, unsupervised”.

The authors said that the book did not hide the potential risks of the diet for cancer patients and highlighted how the regime should be used alongside medical treatment and under supervision.

“Neither the low-carb diet or ketogenic diet is for everyone. But there are a lack of dietitians in Ireland that specialise in ketogenic therapy and people are turning to the internet desperate for help when handed a food pyramid leaflet after being diagnosed with cancer. I know I did,” Ms Kemp said.