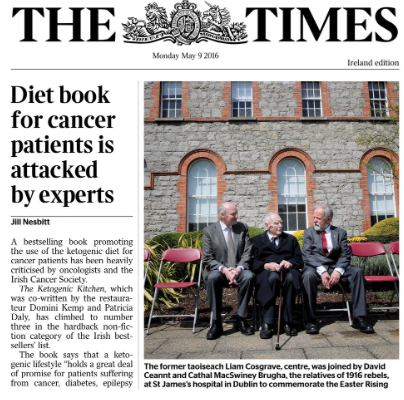 Top story in today's online edition of The Times, written by journalist Jill Nesbitt, takes a closer look at the Ketogenic Diet and the claims made by authors Domini Kemp and Patricia Daly.

The Ketogenic Kitchen, which was co-written by the restaurateur Domini Kemp and Patricia Daly, has climbed to number three in the hardback non-fiction category of the Irish bestsellers’ list.

The book says that a ketogenic lifestyle “holds a great deal of promise for patients suffering from cancer, diabetes, epilepsy and neurological and cardiovascular disease”. In a blurb, the authors say that in the past decade or so “this way of eating – the keto lifestyle – has been shown to be beneficial in the management and treatment of illness, particularly cancer (which we’ve both had, twice) and many chronic illnesses”.

John Kennedy, a consultant medical oncologist at St James’s Hospital in Dublin and chairman of the Irish Cancer Society, said, however, that he would “certainly not recommend a ketogenic diet for anyone being treated for cancer”.

The Irish Nutrition and Dietetic Institute (INDI) said it had “serious concerns about already vulnerable cancer patients buying this book and commencing this diet at home, unsupervised”.

“The ketogenic diet is a medical treatment that should only be undertaken with a dietician, regular blood monitoring and medical support due to the potential side-effects. In the wrong patient and in certain circumstances this diet can be dangerous,” it said.

Ms Daly and Ms Kemp say that the pre-clinical data for the ketogenic diet, which advocates eating a high-fat, adequate-protein and low-carbohydrate diet, is “compelling”. However, they point out that the data is for animals and is case-study based. “What we’re lacking at the moment are randomised controlled trials on humans that confirm the safety and effectiveness of this [ketogenic diet] approach,” they say. Numerous clinical trials are under way, although the book says that “this diet has turned out to be a lifesaver” for a number of people who have used it.

Derek Power, a consultant medical oncologist at the Mercy University Hospital, Cork, and a member of the Irish Society of Medical Oncology, said that malnutrition, poor appetite and alterations in metabolism were common cancer symptoms, which led to severe muscle wasting in 50 per cent of patients. “Both national and international data clearly shows this,” he said.

One of the main claims of the ketogenic diet is that by cutting out carbohydrates, it starves a tumour of glucose. “This is untrue and there is no science, not a single human trial, to back this up,” Dr Power said. “In a ketogenic diet muscle and fat is broken down by the body and converted to glucose which feeds a tumour. Many of the clinical trials on the ketogenic diet in humans have been abandoned,” he added.

Lorraine Walsh, consultant radiation oncologist at the Mid-Western Radiation Oncology Centre, University Hospital Limerick, said that she was frequently asked by patients for her opinion on various “supposed beneficial cancer diets” including the ketogenic diet. “I always deliver the same consistent answer to patients — absolutely none of these diets or homeopathic remedies has ever been scientifically proven to improve a patient’s outcome from any form of cancer.

“As oncologists we too want what is best for our patients and if there was convincing evidence to support a certain dietary intervention, we would certainly be open to its consideration, having evaluated its risk/benefit profile.”

Ms Daly also offers “general cancer nutrition support” using a ketogenic diet and charges cancer patients US$455 per month (€399), with 80 per cent of her work coming from online consultations.

She trained and lectures at the privately owned Irish Institute of Nutrition and Health (IINH). It says its programmes have been “rigorously inspected, audited and approved by” Quality and Qualifications Ireland (QQI), the state body to which private providers can apply to have their programmes validated. QQI, however, said that this was “not correct” and that the IINH was not currently offering programmes leading to QQI-recognised awards.

The directors of IINH are Richard Burton and Margaret Lynch, of Loughlinstown, Co Dublin, and it operates from a small unit at a business park in Bray, Co Wicklow. Mr Burton said that the IINH was approved as a Further Education and Training Awards Council (FETAC) provider in 2010 “which means that the college as well as the award in nutrition & health (level 6) were approved at that time. That award was withdrawn when FETAC merged with HETAC and became QQI.”

The IINH hopes to get this course accredited again with QQI and is in the process of submitting documentation, he said.

It was not possible to get accreditation for the diploma in nutritional therapy — Ms Daly’s qualification — as it was not recognised as a healthcare profession in Ireland, Mr Burton added. He agreed that the reference to QQI on the website was incorrect.

Ms Daly describes herself as a “fully qualified nutritional therapist” and said that she left her corporate career following her own cancer diagnosis to study nutrition. She said she has “worked with hundreds of cancer patients across the world”.

In 2013 Ms Daly was invited by the Irish Cancer Society to share her knowledge in an unpaid talk to some of the society’s staff and nurses about the “benefits of a nutritionist’s consultation” for cancer patients. On her website, Ms Daly says that she has ventured into motivational speaking and describes the society as one of her clients. The society said it was not a client of Ms Daly. Asked about that response, Ms Daly said she was “not sure what the confusion is — they asked for my professional services, I went in for a one-off talk including a Q&A of about 90 minutes like I regularly do with various clients”.

The North American rights of The Ketogenic Kitchen have been sold to the publisher Chelsea Green. Ms Kemp and Ms Daly say that there are “potential dangers to the ketogenic diet, especially if the diet isn’t implemented correctly and important blood markers are not being monitored. It’s also important to note that there are contra-indications and situations where somebody shouldn’t go keto.” Speaking to The Times, Ms Daly said that the book made clear that it should be used alongside medical treatment and under supervision.

In relation to INDI’s concerns about the risk of cancer patients following the book unsupervised, Ms Kemp said: “If they read the book, they will see that this exact point is emphasised throughout and fully explained. Neither the low-carb diet or ketogenic diet is for everyone. But there are a lack of dieticians in Ireland that specialise in ketogenic therapy and people are turning to the internet desperate for help when handed a food pyramid leaflet after being diagnosed with cancer. I know I did.”

Ms Daly said that they addressed “the issue of people doing KD unsupervised in our book in various places and urge chronically ill patients to seek support. We can’t control patients but provide vital, researched information and educate them around the potential issues.”

UCD are leading an EU study in older...

On this WORLD OSTEOPOROSIS DAY 2022 check out...