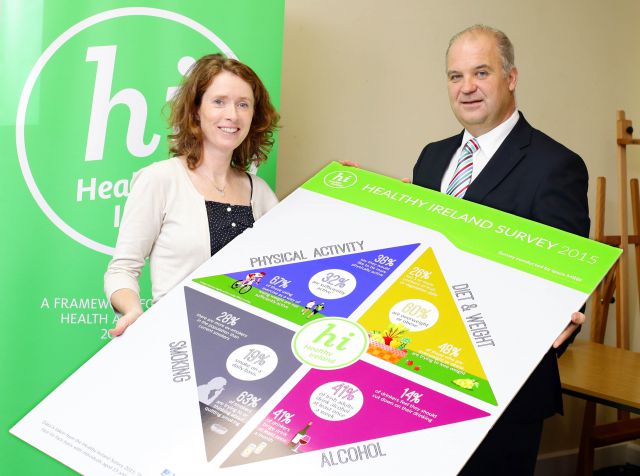 The Minister for Health, Mr Leo Varadkar, launched the reults of the Healthy Ireland Survey on Wed October 7th, the first national comprehensive survey conducted since 2007.  Key results found that:

The first ever Healthy Ireland Survey of 7,500 people aged 15 and over gives the most up-to-date picture of the health of the nation, including lifestyle factors like smoking, alcohol consumption, physical activity, diet and mental wellbeing.

Minister Varadkar said: “There have been some positive changes since the SLAN survey in 2007 including a further drop in smoking rates, and the incidence of overweight has actually levelled off, while levels of regular exercise are rising. However, we still face some serious risks to the future health of the nation including alcohol misuse or harmful drinking patterns, and the significant number of people who still do not take enough exercise or who are overweight.

“This survey gives us some really useful information and will be repeated every year. What you don’t measure, you can’t improve. It will feed into new policies on obesity, sexual health, and physical activity, and further legislation to control tobacco use. And we will shortly publish the Public Health Alcohol Bill. But it’s important to recognise that society as a whole needs to work with the Government to address these issues. And Healthy Ireland provides the perfect framework for that task.”

Some of the other key findings in the Healthy Ireland Survey include:

Dr. Tony Holohan, Chief Medical Officer at the Department of Health commented that “We know in Ireland that the number of people experiencing chronic diseases is increasing dramatically. And while we rightly focus on improving the quality and efficiency of the health services needed to care for these patients, we also need to have a greater emphasis on prevention, as we know that the majority of these chronic diseases are preventable. The valuable data coming from this Survey will assist us to more effectively address a range of issues such as overweight and obesity, problematic alcohol consumption, smoking, and physical inactivity.” He also explained that the Survey results will assist the Department of Health and its stakeholders to inform current policy direction and will be used to develop new policy responses from the considerable evidence about health behaviours in Ireland.