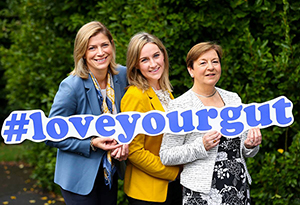 In Ireland, thousands of us experience digestive problems - from bloating and constipation to indigestion and irregular bowel movements - and yet suffer in silence. This year’s Gut Week, running from 31st August – 6th September, aims to break the ‘Poo Taboo’ and end the embarrassment often associated with some of Ireland’s most common conditions.

A survey conducted by Yakult to mark Gut Week reveals some interesting statistics:

The Gut Week campaign is committed to improving the nation’s gut health. This initiative is part of Love Your Gut, an ongoing campaign supported by Yakult, which serves to highlight the vital role of the digestive system and emphasise the importance of maintaining good gut health. Gut Week is an initiative of the Irish Practice Nurses Association (IPNA), the Irish Society for Colitis & Crohn’s Disease (ISCC), the Irish Nutrition & Dietetic Institute (INDI) and Gastroenterology Interest Group [GIG] of the INDI – supported by Yakult Ireland.

Over the past 10 years, Gut Week has reached millions of people, prompting more than 240,000 members of the public to access the campaign’s advice resources for further information.

Dr Linda Thomas, Science Director for Yakult in the UK & Ireland, said: “We are sometimes reluctant to talk about our gut problems. With Gut Week, we are trying to break down the poo taboo and get people to talk more openly about digestive problems.”

Tricia McArdle Chairperson of the Irish Society for Colitis and Crohns Disease: “Reports worryingly show that patients living with Inflammatory Bowel Diseases, Colitis and Crohn’s disease, suffer from distress, anxiety and fear.  The ISCC works to help support patients and to alleviate their fears and worries and so we are delighted to be part of Gut Week again this year, which aims to increase awareness and break the stigma of talking about these life altering conditions and digestive health in general.”

Louise Reynolds Communications Manager of the Irish Nutrition & Dietetic Institute: “The INDI is delighted to be involved in Gut Week. Together with our specialist Gastrointestinal dietitians, we are happy to support this important initiative and encourage people to eat well and make small changes to their diet resulting in big changes for their health.”

Lynn Alexander Secretary of the Gastrointestinal Group of INDI: “Digestive health is key to our overall wellbeing and the conditions that affect the digestive system can be some of the most devastating.  Many issues and symptoms can be controlled through eating a better diet and leading a healthier lifestyle. The Gastrointestinal Interest Group of the INDI is proud to support Gut Week with other leading organisations, to ensure more people are able to enjoy good digestive health.”

Ruth Morrow PRO of the Irish Practice Nurse Association: “The IPNA is proud to be involved with Gut Week 2015.  We hope that it will encourage everyone to be more aware of their gut health and seek help straight away if they notice something is wrong.  Practice Nurses are especially keen for people to overcome any embarrassment they feel when discussing their bowel habits so that there is no unnecessary delay in the diagnosis of treatable conditions. Let's make the 'Poo Taboo' a thing of the past!"

Pictured at the launch are (left to right): Louise Reynolds, Communications Manager, INDI, Tricia McArdle, Chairperson of the Irish Society for Colitis and Crohns Disease and Lynn Alexander, Secretary of the Gastrointestinal Group of INDI.

More information about the LOVE YOUR GUT Campaign can be found at www.gutweek.ie and Twitter on #loveyourgut