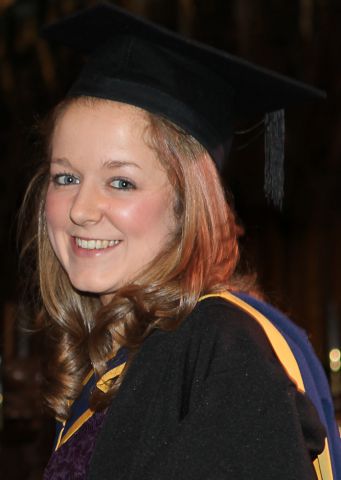 Congratulations to Megan Merrick who was presented with the INDI Student Prize 2014 at the recent INDI Conference held in the Clyde Court Hotel, Dublin. The prize, which was established in 1975, is awarded to the final year student who maintains the most consistently high academic standard throughout the Joint Dublin Institute of Technology/Trinity College Dublin BSc (Hons) Human Nutrition and Dietetics programme. Megan was also awarded a Gold Medal by the Board of Trinity College and a Dublin Institute of Technology Academic Excellence award. These awards are made to candidates who have shown exceptional merit at degree examinations. Her academic achievements also meant that Megan was awarded the Yakult award for obtaining the highest place in the final year examinations.

Megan is from Galway and having completed her Leaving Certificate in 2009, chose to study Human Nutrition and Dietetics on the Joint DIT/TCD programme. Having recently graduated from the programme and having got the opportunity to further enhance her clinical skills by working as a Dietitian in St. James’s hospital, she has stated that choosing to study Dietetics on the DIT/TCD programme was one of the best decisions that she has ever made.

Megan believes that the integration of the science of nutrition and dietetics, as well as the practical-based clinical classes and structured practice placements (at the end of years 1, 2 and 3) underpin the strength of the programme. Megan under took her Practice Placement A in the Bon Secours Hospital, Galway, her Practice Placement B in community settings in HSE Galway and Limerick and in Portiuncula Hospital and her Practice Placement C in Galway University Hospital. She believes that the three practice placements in particular enabled her to enhance and develop the core competencies required to work as a Dietitian in both the hospital and community setting, and the contribution of the dietitians in each of these settings should be acknowledged. During her final year, Megan also got the opportunity to undertake a research project in the area of Vitamin D and Crohn’s disease under the academic supervision of Professor Maria O’Sullivan, which provided her with invaluable insight into the field of research and made her more aware of the opportunities available to graduates of the programme.

“Having taught Megan in all four years of the Programme, she exhibits the attributes that academic staff and practising dietitians want to see in a student/new graduate. She has consistently shown herself to be a hard working, diligent and reliable student who works well as a class/team member for the good of the class/team. She emits a quiet, self-assured confidence and her easy-going nature makes it easy for her to quickly develop a good rapport with students, patients and staff,” commented Dr Clare Corish, Programme Director Joint DIT/TCD BSc (Hons) Human Nutrition and Dietetics.