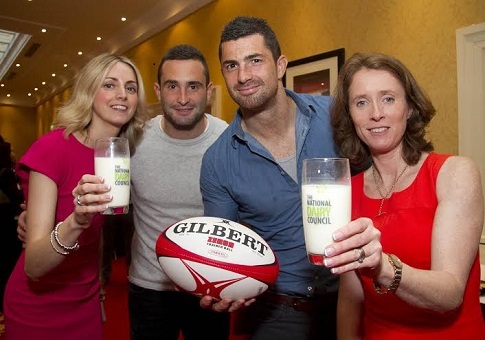 The role of nutrition in supporting healthy ageing, particularly in relation to bone health and skeletal muscle mass and strength, was the focus of a  specialist symposium for dietitians organised by the Irish Nutrition and Dietetic Institute (INDI) and the National Dairy Council (NDC), at Dublin’s Clyde Court Hotel (13th May, 2014).

Richelle Flanagan, Interim CEO of the INDI, explained that malnutrition, sarcopenia and osteoporosis are just a few examples of clinical conditions which are particularly relevant to the ageing process and older adults.

‘The symposium explored the nutritional challenges facing the ageing population group and how dietary advice for this group must be tailored to reflect their specific requirements and health concerns,’ says Ms. Flanagan.

Plenary sessions were delivered by experts from Switzerland and the Netherlands.

Speaking about ‘The Role of Protein in the Healthy Ageing of the Skeleton,’ Professor Jean-Philippe Bonjour, Division of Bone Diseases, UniversityHospital, Geneva considered the nutritional requirements for bone health with a primary focus on protein.

‘Among macronutrients, proteins play a major role in bone health,’ said Professor Bonjour. He said that protein intake, in association with calcium, insofar as vitamin D status is adequate, exerts a specific impact on bone health throughout life.

Professor Bonjour discussed the concern whether, in the elderly, the current recommended dietary allowance for protein is too low – an on-going topic of debate among nutrition experts at present.

‘A large number of epidemiological studies in both pre- and postmenopausal women, as well as in elderly women and men, has shown a positive relationship between protein intake and area bone mineral density,’ said Prof. Bonjour.  He also highlighted intervention trials which support the beneficial influence of dietary protein on bone health during this life-stage.

Professor Bonjour’s overview of the relationship between dietary protein and bone health highlighted why the increasing trend or conception regarding the removal of animal proteins from the diet, is not scientifically justified in relation to bone health.

‘Exploring theScience behind the Benefits of Dairy Protein in Age-Related Changes in Skeletal Muscle’ was the subject of a presentation by Professor L.J.C. van Loon, Professor of Physiology of Exercise, Maastricht University Medical Centre, The Netherlands.

Professor Luc van Loon described how ageing is accompanied by a progressive loss of skeletal muscle mass and strength, leading to the loss of functional capacity and an increased risk of developing chronic metabolic disease.

‘Recent studies suggest that the muscle protein synthetic response to food intake is blunted in the elderly. The latter is now believed to represent a key factor responsible for the age-related decline in skeletal muscle mass,’ said Professor van Loon.  He described contemporary research by his group which allows them to study dairy protein digestion and absorption kinetics, as well as the subsequent muscle protein synthetic response in humans.

‘Besides food intake, physical activity and/or exercise stimulate muscle protein accretion. However, the latter largely depends on the timed administration of amino acids and/or protein prior to, during, and/or after exercise. Prolonged resistance type exercise training represents an effective therapeutic strategy to augment skeletal muscle mass and improve functional performance in the elderly,” said Professor van Loon.

He called for further research into the interaction between nutrition, exercise and the skeletal muscle adaptive response, which would support more effective strategies to maximize the therapeutic benefits of lifestyle intervention in the elderly.

The symposium concluded with an interactive case study facilitated by community Dietitian manager Margaret O’Neill, HSE- Dublin South Central, and senior community Dietitian Leán O’Flaherty, HSE-DublinNorthCity, which addressed nutritional considerations for elderly patients as typically seen in community practice. ‘More than 140,000 adults in Ireland are malnourished or at risk of disease related malnutrition (DRM), half are over 65 years of age with the vast living in the community,” said Ms. O’Neill. “Good nutritional care and in particular optimising appropriate protein intake is essential for the management of the older person with DRM.”

Speaking at the Symposium, Dr. Catherine Logan, Nutrition Manager, National Dairy Council, highlighted the nutritional value of milk and dairy. “Milk is renowned for being a source of dietary calcium, but it is important to remember that milk – as well as yogurt and cheese - provide a range of other nutrients too. These foods are an excellent source of high quality protein and, what’s more, their versatility allows them to be included in a variety of meals and snacks throughout the day,” said Dr. Logan.

The INDI & NDC Symposium is organised as part of National Dairy Week, which runs from 12th – 18th May, 2014.    Organised by The National Council, National Dairy Week creates an opportunity to showcase the excellence of our pasture based dairy farming and produce – from farm to fridge; and also to highlight the quality, versatility and nutritious benefits of dairy within our lives, as part of a healthy, balanced diet.

Further information about the Irish Nutrition and Dietetic Institute at www.indi.ie and about The National Dairy Council at www.ndc.ie.