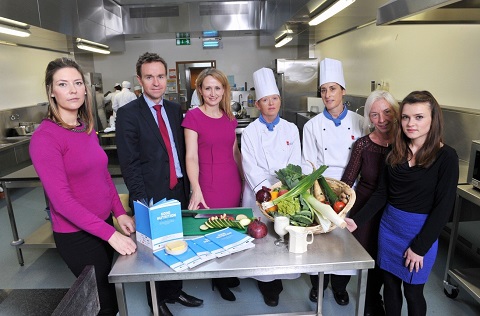 The INDI is delighted to support Dr Aoife Ryan’s excellent book titled ‘Good Nutrition for Cancer Recovery’, a high-protein high-calorie cookbook developed specifically for cancer patients with involuntary weight loss. The book, which was funded by a Health Research Board (HRB) Knowledge Exchange and Dissemination Scheme (KEDS) awarded to Dr Aoife Ryan in UCC, allowed for the development and printing of 19,000 copies which will be available to cancer patients throughout Ireland free of charge.

International data has shown that cancer patients who lose more than 10% of their pre-illness weight have death rates that are significantly higher than weight-stable cancer patients. Recent research from UCC also has highlighted the increased toxicity to chemotherapy cancer patients experience if they are malnourished.

A call for recipes was sent out through the INDI, the Irish Association of Nurses in Oncology, professional chefs, and also an outreach campaign was launched at 17 hospitals in Ireland, inviting cancer patients to share recipes they enjoyed during their time on treatment. Contributors were asked to submit nourishing recipes with simple lists of ingredients. Bearing in mind the majority of cancer patients are older, the team asked that contributors focused on traditional Irish dishes.

Of the one hundred and twenty recipes submitted and analysed some fifty three of the most appropriate recipes were then chosen for inclusion in the book. Aoife and Eadaoin NiBuachalla (who co-ordinated the project) in UCC worked with the chefs based in the Culinary Arts Department at Cork Institute of Technology, who aided in the formulation and fortification of recipes submitted. The recipes were categorised into soups, light meals, main meals, smoothies, desserts and snacks. Over half of the recipes in the book were submitted by INDI members.

Nutritional targets for meals were based on guidelines provided by the British Dietetic Association’s 2012 publication ‘The Nutrition and Hydration Digest: Improving Outcomes through Food and Beverage services’ which offers guidance on providing nutrition in hospital and care-settings, and makes recommendations for the nutritionally.

19,000 copies of the cookbook have been produced and will be distributed to hospitals and cancer centres around the country. The cookbook has been endorsed by the INDI, IrSPEN and ISMO (Irish Society for Medical Oncology). It is hoped that this resource will assist anorectic patients in the challenging task of meeting their nutritional requirements and also help to bring enjoyment back to meal time.

Dietetic Departments who would like to order copies of the book (as a once-off delivery) are encouraged to apply online at www.cancercookbook.ie or at www.breakthroughcancerresearch.ie. Once initial deliveries are made over the next 6 weeks, further individual copies can be ordered through Breakthrough Cancer Research on payment of postage and packaging. Individuals or cancer patients who wish to make a donation to cancer research can text BCR to 50300 to donate €4 to cancer research.

We are delighted to bring you this CPD...

The risks of weight loss during cancer

Cancer patients with obesity advised not to lose muscle during...