How fruit drinks and cordials could be contributing to childhood obesity 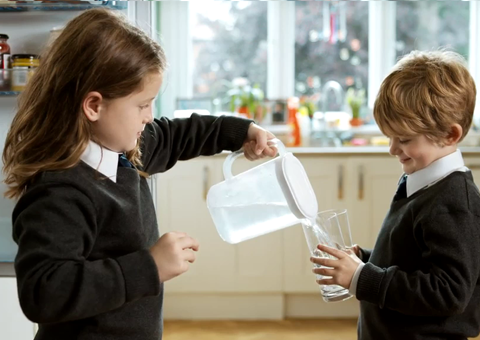 Monday 2nd December 2013: As part of the campaign to take on childhood obesity, safefood today is urging parents to choose water instead of juice drinks as they announced results of a label survey into the sugar levels of a wide selection of popular drinks for children.

Many of the drinks that safefood compared contained as much sugar as ’fizzy drinks’. For example, a 200ml serving of a popular[i]  juice drink contained as much sugar as the equivalent serving of well-known fizzy soft drinks such as Coca-Cola, Pepsi or 7UP[ii]. Some popular supermarket brands of cordials and dilutes were found to contain even higher sugar levels, with as much as five cubes of sugar in a small glass.

Dr Cliodhna Foley-Nolan, Director of Human Health and Nutrition, safefood said “Many parents may be under the impression that juice drinks that mention the term ‘fruit’ are a healthier alternative for their children than fizzy drinks. What parents may not realise is that these drinks are often really high in sugar and could contain as much sugar as ‘fizzy’ soft drinks.”

Professor Donal O’Shea, Obesity Specialist with the HSE highlighted the importance of reducing sugar in our diets: “There is now clear evidence that links the consumption of sugar-sweetened drinks to overweight and obesity among children and adolescents. Furthermore, there is evidence that reducing their intake will help your child become a healthier weight. As parents, we tend to ignore the contribution of liquids to our kids daily calorie intake. We need to start viewing these drinks as “threats not treats” and certainly not something to be had everyday. Milk or water are best for our children”

We know that children are regular consumers of fizzy and juice drinks on the island of Ireland”, continued Dr Foley-Nolan. “Our most recent survey³ of parents found that 45 per cent of children are drinking soft drinks at least once a day or more. The same survey also found that 30% drank cordials at mealtimes. Reducing a child’s intake of such drinks and replacing with water or milk would be a practical step.”

As a rule don’t buy them – if they’re not in the house they cannot be consumed. Remember that saying no once at the supermarket is a lot easier than

saying no twenty times at home.

Switch to water at the cinema, and when eating out - drinking a sugary drink with foods that are high in fat or sugar is getting a ‘double dose ‘of sugar.

A small glass (100mls) of 100% fruit juice or a no sugar–added smoothie once a day counts as one of children’s five a day.

To find out more about the safefood campaign including how-to videos from health experts and practical advice and guides for parents, visit:www.safefood.eu

Assessment of the drinks was carried out between Oct-Nov 2013 by safefood based on drinks commonly available for purchase in retail outlets on the island of Ireland.

³safefood; Millward Brown Lansdowne October 2013 survey of 900 parents on the island of Ireland.

Success for INDI in bringing ICD2028 to Ireland

We are absolutely delighted to announce that we...

So you want to be a dietitian? Watch...

The 30 Different Plant Based Foods Per Week Challenge

Have you heard of the latest gut health...